Prenuptial Agreements How Long Do They Take ? | SB Family Lawyers

Prenuptial Agreements – how long do they take?

Prenuptial Agreements – how long do they take?

Prenuptial Agreements – how long do they take and how long before our wedding should we apply for one?

A prenuptial agreement is an agreement which a couple can enter into, which sets out the way in which their assets (and liabilities) will be divided in the event their relationship breaks down in the future. This form of agreement is similar to a contract, however, it is made pursuant to the Family Law Act 1975 (Cth).

Sometimes parties enter into prenuptial agreements because they want to protect certain assets that they are entering into the relationship with, such as a company, a trust, an inheritance which has been received, superannuation, property, and many other assets. Sometimes parties have significant debts at the commencement of the relationship and do not wish to be made liable for the other’s debts. 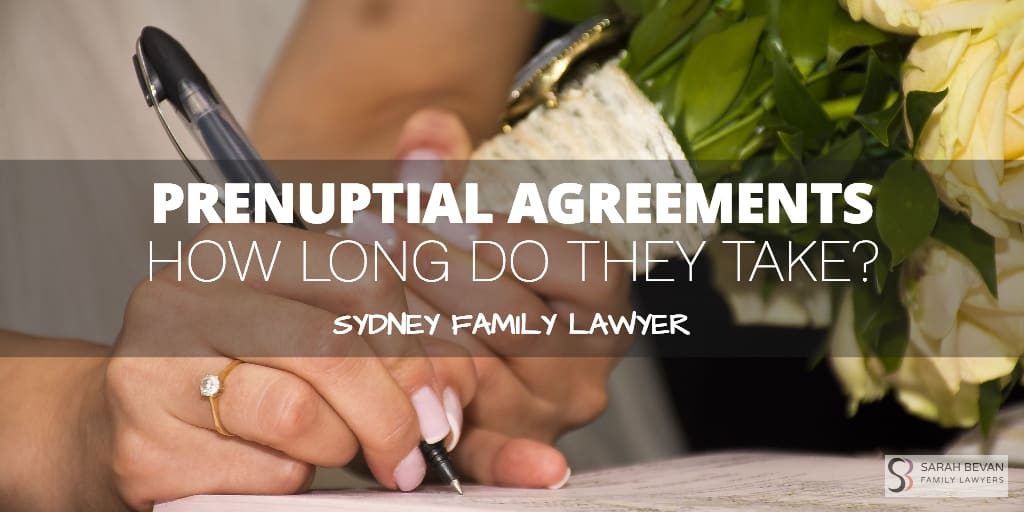 Once the prenuptial agreement has been finalised and in the unfortunate event a couple separates, their property will be divided in accordance with the terms of the agreement. This means that the Family Law Courts will not be able to be involved in the process of dividing the property.

Implementing the terms of a prenuptial agreement should have the effect of simplifying the property settlement process after the breakdown of a relationship and provide certainty to both parties in how the property will be divided.

The agreement will contain a certificate for each lawyer to sign, certifying that they have provided their client with advice regarding the agreement, their entitlements and the advantages and disadvantages of entering into the agreement.

If the prenuptial agreement has not been drafted in accordance with the Family Law Act 1975 (Cth), then there is a possibility that it could be set aside by the Family Law Courts, and the couple will need to go through Court proceedings to obtain a property settlement.

The recent landmark High Court decision of Thorne v Kennedy [2017] HCA 49 demonstrated that the Court is not opposed to setting aside prenuptial agreements.  In this case, the wife was 36 years old and the husband was 67 years old. The couple met online and quickly commenced a relationship. The wife was living in Europe and spoke little English, she had very few assets and no children. The husband was living in Australia, he was a wealthy property developer and had children from a previous relationship. The husband flew the wife over to Australia to have her move in with him, and they decided to marry. A mere 10 days before the wedding, when the wife’s family had already flown into Australia from Europe, the husband provided the wife with a prenuptial agreement. He told her that if she did not sign the agreement, the wedding would be cancelled.

When the matter first went before the Court, the trial Judge in the Federal Circuit Court of Australia set both agreements aside and said that the wife signed the agreements under duress, in circumstances where she did not have equality of bargaining power and the outcome for her was not fair. When the matter was appealed by the husband’s estate, the Full Court of the Family Court of Australia said that the agreements were binding on both parties and that there was no undue influence, unconscionable conduct or duress.

The matter then went to the High Court, where it was determined that the agreements were not valid as the husband had used unconscionable conduct and undue influence. The High Court said of the wife (at paragraph 47):

The High Court confirmed that these agreements signed by the wife were bad bargains and that due to her inequality of bargaining power and in spite of the legal advice she received, she had signed. Therefore, the agreements were set aside.

Being aware that prenuptial agreements are effective tools for setting out how a couple’s property should be divided in the event of a relationship breakdown is an effective means of providing some certainty and guidance for an unwanted relationship breakdown in the future, but given the recent outcome of Thorne v Kennedy, couples should be aware that these agreements are not bulletproof, especially where there are factors of undue influence, unconscionable conduct or duress.