Post-Nuptial Agreements, Is that really a thing?

Post-Nuptial Agreements, Is that really a thing?

Most people are familiar with the term “pre-nuptial agreements” or “pre-nups”.  But what a lot of people don’t know is that it is possible to enter into a similar agreement even if you are already married or in a relationship. 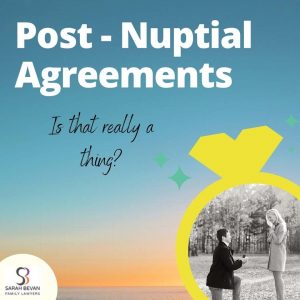 When couples are getting married, there is usually a lot to think about and plan.  A “pre-nup” might be left down the priority list, and it might either simply not be possible, or not advisable to finalise the “pre-nup” before the wedding.  But the same document, with only a slight difference in relation to the relevant section of the Family Law Act, can be signed by the couple after the wedding.

So if you are already married, or already in a relationship, you are still (if both of you are willing) able to enter into a Financial Agreement.  The reasons for people doing so vary and can include leaving the “pre-nup” arrangements until too late, or one of you comes into family money such as an inheritance or your life circumstances change.