Can video and audio recordings be used as evidence in parenting proceedings?

Can video and audio recordings be used as evidence in parenting proceedings?

An analysis of recent case law

Family lawyers today are practicing in a world of rapid technological advancement that is transforming the ways in which we interact.  It has become increasingly apparent that due to the

heightened emotions and unfortunate circumstances in which separation often occurs, parents post-separation often record their conversations with the other parent without their consent, and seek to put this evidence before the Court.

As such, we are being asked by our clients as to whether visual and audio recordings can be used as evidence in family law proceedings.

The primary pieces of legislation that govern the use of evidence in family law parenting proceedings in Australia, and specifically in NSW, are:

Section 69ZT(1) of the Family Law Act provides that large parts of the Evidence Act do not apply in child-related proceedings conducted under the Act.  These include, among others, Parts 3.2 to 3.8 (which deal with hearsay, opinion, admissions, evidence of judgments and convictions, tendency and coincidence, credibility and character).  However, the Court may decide to apply one or more of the provisions in the Evidence Act in exceptional circumstances, or where the importance, subject matter and probative value of the evidence is warranted in the proceedings.

Importantly, Part 3.11 of the Evidence Act is not excluded in child-related proceedings, including section 138 that discusses the admissibility of evidence.  This section provides that evidence that was obtained improperly or in contravention or impropriety of an Australian law is not to be admitted unless the desirability of admitting the evidence outweighs the undesirability of admitting evidence.

Further, The Surveillance Devices Act 2007 (NSW) prohibits the recording of a private conversation without the consent (express or implied) of all parties to the conversation unless it is reasonably necessary for the purpose of protecting the lawful interests of the party who records the conversation.

In New South Wales, if a party who is involved in family law proceedings seeks to have audio or video recordings admitted as evidence, the Court must first determine whether the recordings have been illegally obtained.  In order to do this, the Court will need to consider whether the person who made the recording without the consent of the other party did so to protect their lawful interests and will also need to consider whether it was reasonably necessary for the recording to be made without consent.

Further, s 69ZT(2) of the Family Law Act states if the Court decided that the exception applies and the recording is admitted into evidence, the Court has the discretion to apply such weight “as it thinks fit” to the evidence admitted due to the Evidence Act not applying.

The Court has ruled on this matter in a number of recent cases that prove useful in understanding the application of the legislation.

The father sought to rely on an affidavit through which the transcription of 13 sound recordings, many of which were from the father’s mobile telephone, had been made.  The relevant affidavit was that of a translator who purported to have translated a collection of recorded episodes taken by the father, mostly without the consent of the persons who were recorded.  The participants were mainly the father, the mother, the mother’s new husband, the child, the father’s new wife, and the maternal grandparents.

The mother sought to resist the admission of the recordings.  Justice Wilson relied mainly upon s 138 of the Evidence Act allowing the transcriptions into evidence, despite also finding that the transcription was largely defective in terms of inaccuracy and incompleteness.  In doing so, Justice Wilson stated that “the probative value of receiving the evidence outweighed the prejudice associated with its receipt.  The recordings related to several important questions of fact that were involved in the determination of parenting issues, quintessentially important under s 60CA of the Family Law Act. Having the transcripts of the recordings in evidence enabled me to have a fuller picture of the totality of the evidence so as to better enable me to adjudicate on the threshold question, namely, the best interests of the child.”

The documents were admitted into evidence, subject to weight.

Two of the videos were recorded on the street front and were as such in a public place so the conversations could not be considered private in terms of Section 4 of the Surveillance Devices Act and thus not in contravention of s 7 of the Act.

However, parts of the third video were recorded inside the parties’ home and were considered to be the subject of a private conversation. However, the Court took the view that the father’s conduct fell within the exception under s.7(3) of the Surveillance Devices Act as all of the principal parties had, impliedly, consented to the recording of their conversations. The Court reached this decision as “it was clearly obvious that he was so recording and he had stated to them that he was. While the mother stated that she had asked not to be recorded, the Court notes that the transcript of the conversation did not indicate words to that effect. To the contrary, the maternal grandmother made statements such as: “keep recording me, I don’t care”. Accordingly, the Court is satisfied that the recording which took place inside the home is, similarly, admissible.”

Judge Kemp went further to state that even were it to find that the evidence was obtained in contravention of s.7 of the Surveillance Devices Act, the evidence would still have been admissible under s.138 of the Evidence Act, as “the desirability of admitting that evidence in order to determine the best interests of the child, substantially, outweighs the undesirability of admitting that evidence as produced by the father in the circumstances of this matter.”

The mother sought to adduce video recordings of interactions between the father and the mother at the time of handovers at the mother’s house, made without the father’s consent.

Judge Heffernan relied on s 138 of the Evidence Act and held that it was not improper for the mother to make secret video recordings of the two handovers in circumstances where the mother has a legitimate interest in her personal safety, welfare and in preventing the children from being exposed to conflict between the parties.  The Court, therefore, found that it was not a contravention of an Australian law for the mother to make the video recordings of the handover.

In consideration of the Surveillance Devices Act in South Australia that is substantially similar to that in NSW, Judge Heffernan found that the video recordings of the handovers captured private conversations between the parties.  They were without the consent of the father and unknown to him.  However, it was found that an exception applied in that the mother was acting in protection of her lawful interests in obtaining evidence of the family violence inflicted by the father.

The Judge then considered whether the audio recordings should be admitted pursuant to s.138 of the Evidence Act because the desirability of so doing outweighs the undesirability of excluding them.  In exercising this discretion, Judge Heffernan found that the factors of the invasion of trust and privacy between the father and children’s relationship outweighed the probative value of the evidence and therefore the audio recordings were not adduced into evidence.

If you need assistance in your parenting matter, please contact us on Phone: (02) 9633 1088 to make an appointment with one of our experienced family lawyers. 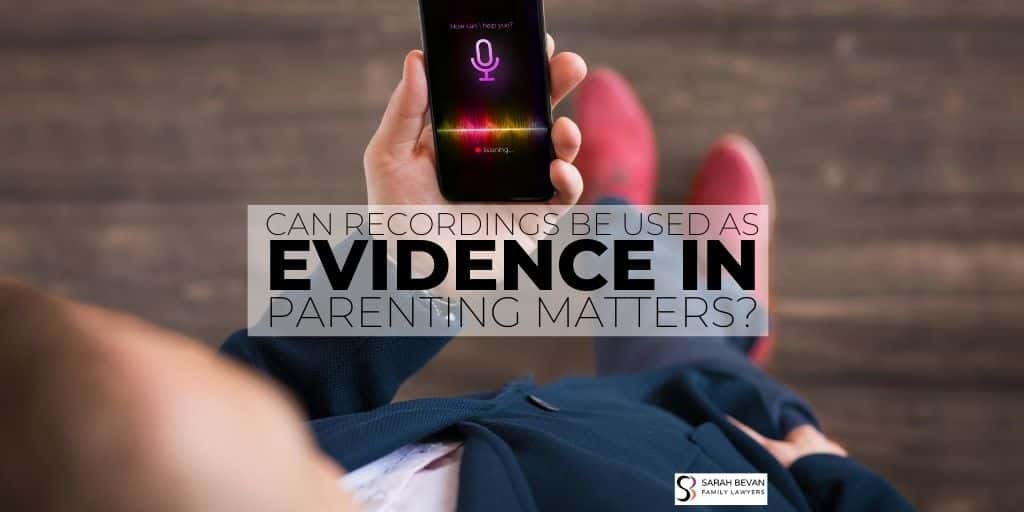