People facing the end of a marriage or relationship will often find that many friends, family and colleagues consider themselves experts in family law.

When it comes to property settlements there are many misconceptions.

As leading property settlement lawyers in Sydney, we think we have heard most of the misconceptions and myths around. Here are some examples we at Sarah Bevan Family Lawyers hear about the division of property at the end of a marriage.

The source of this myth is obvious – Californian TV and movies!  In Australia, there is no such thing as common property.  For married couples section 79 of the Family Law Act and for de facto couples, whether heterosexual or same-sex, the corresponding section is 90SM of the Family Law Act. These sections provide that property settlements are discretionary based on a number of steps including assessing contributions of the parties, and what adjustments should be made for future needs and other factors.

The main income earner gets more:

Sometimes people tell us that because they earned the money which has resulted in an increase of matrimonial property, they should get the lion’s share. Unfortunately, this view often overlooks the differing nature of contributions in a relationship.  Relevant contributions are not limited to solely financial contributions, as domestic and homemaker contributions are also important.  In traditional marriages where the wife stayed home to look after the children, and the husband was the breadwinner, those types of contributions will typically be considered to be equal.  In this example, it may be that the wife actually ends up receiving more because of the adjustment or ‘future needs’ step of a property settlement as she will have a much more limited earning capacity in comparison with the husband.

Whoever brings an item of property into a relationship gets to keep it:

The woman/man gets treated better in a property settlement:

Often people believe that the other gender (in a heterosexual relationship) gets more favourably treated by the courts.  The reality is that the law is gender-neutral.  So if the exact same circumstances existed in two different cases but with the genders reversed, the outcome should be the same.

If a person leaves the home, they forfeit their rights:

Simply because a person leaves the home, does not mean they lose their rights to claim their entitlements.  However, there are often practical repercussions associated with leaving the home, and it is important to get advice early.

It is important to be as secretive as possible:

Unfortunately, when one party tries to hide assets or refuses to provide required disclosure of relevant information, this often has the effect of significantly protracting a dispute, leading to greater costs and angst to both parties. Family law relies on the principle of fairness, and there are means available to help force full disclosure when needed. The Family Law Rules focus on the importance of being upfront as early as possible so that the issues in dispute can be limited.  We usually find that property settlement can happen more quickly, are less expensive and are more amicable when both parties act appropriately.

You should stop paying the mortgage on the home so your former partner/spouse is put under pressure: 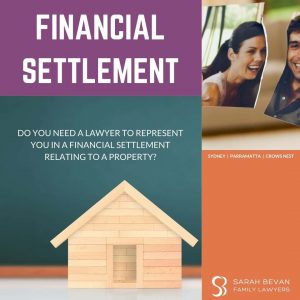 Most people hold mortgages, at least on the family home, in the joint names of both parties.  As far as the lender is concerned, both parties are equally liable for the mortgage regardless of who is living in the home or what is happening in your personal lives.  So if there is a serious default both parties could end up with a black mark on their credit ratings which could have ongoing, detrimental consequences.  At the end of a relationship, emotions will inevitably be running high.  But both parties need to pay close attention to the immediate practicalities of their lives and in most cases, just holding on and maintaining the ‘status quo’ for a short while might just give both a chance to breathe, deal with the emotions and then make more objective and rational decisions.

Seeing a property settlement lawyer means you will end up in a war in a long and costly trial in court:

This could not be further from the truth. Getting advice as early as possible from our specialist family lawyers is aimed at guiding you on a path towards minimising the trauma of the separation.  Some people see us well before separation actually happens to help prepare themselves from a practical perspective and to increase their chances of obtaining an early resolution of their financial affairs once separation happens.  Other people see us right at the time of separation when emotions are raw.  Usually, in these circumstances, we aim to help people with the immediate practical legal issues and to focus on avoiding knee jerk emotional decisions.  Sometimes property settlement proceedings in the Family Court are unavoidable, but those cases are rare.

If you are dealing with an actual or expected end of your relationship, you will likely be suffering grief and trauma. It is important to cut through all the misconceptions and get specialist family law advice based on your own unique family circumstances.

Contact Sarah Bevan Family Lawyers so that we can help you through the property settlement minefield.