Practical tips for disclosure and evidence gathering in Family Law

Practical tips for disclosure and evidence gathering in Family Law

Full and frank disclosure is a cornerstone of family law, but that does not mean it is easy or readily forthcoming. Reticence to disclose and misunderstanding about what to disclose is common for the parties, and even for lawyers. How to appropriately manage disclosure or non-disclosure, by a client or the other party, can also be a difficult task.

Family Law Rules 2021 in the Federal Circuit and Family Court of Australia set out various rules in relation to disclosure, and case law is also important in the area.

The Court Rules require disclosure to be provided prior to the first court date, and the Family Law Rules also set out rules for disclosure prior to commencing Court proceedings.

However, it is important to remember that disclosure is an ongoing process not a once-off event. A client will inevitably keep receiving information that may be relevant to the case throughout negotiations or throughout the court proceedings.

Lawyers should request disclosure from their clients and the other party at regular intervals, and/or prior to or following significant events, in the proceedings.

The possible implications of failing to disclose can be severe.

One of the most well-known Full Court cases dealing with this issue is Black v Kellner (1992) FamCA 2 in which a failure by the husband to provide full and frank disclosure had significant ramifications on his assessed entitlements to the known asset pool. Important to note is that, as stated by the Full Court in the marriage of Kannis (2003) 30 Fam LR 83, whether a failure to disclose is purposeful or accidental is “beside the point” and inferences as to the asset pool and the entitlements of each party may be drawn by the Court regardless of the cause of the failure to disclose. Costs orders, adverse findings on credit, refusal by the Court to accept non-disclosed documents into evidence and a significant shift in entitlements in the other party’s favour are all consequences that can flow from a failure to disclose.

What can my lawyer do if my ex is not disclosing financial documents?

In the face of non-disclosure, lawyers should consider:

While understanding the duty to disclose and how to handle non-disclosure is crucial to managing family law cases, lawyers must also be prepared to gather evidence by alternate means if disclosure is not forthcoming.

How can my lawyer gather evidence of financial documents?

The following methods of evidence gathering, noting the Rules governing them, should be considered:

A subpoena is an order requiring an individual or organisation to either produce documents to the Court on or before a specified date and/or give evidence in Court. It is important to draft subpoenas carefully and with specificity to limit the documents required to be produced and ensure that the information contained in those documents goes to relevant issues in the proceedings.

These are Notices issued by one party to another setting out documents sought by that other party to produce documents at a court hearing when those documents are called on by the party issuing the Notice. Their usefulness can be limited by time constraints at Court, but when used appropriately can be highly effective.

These are Notices issued by one party to another asking the other party to admit a fact is true or a document is genuine. These Notices carry potentially enormous consequences, as silence is taken to be acquiescence.

A party can be required to provide a list or affidavit of documents to which their duty of disclosure applies. A failure to properly complete the list or affidavit can mean that a document will not be received into evidence at a later stage.

Given the significant discretion available to the Court and the “s/he said, s/he said” nature of family law proceedings, it is often crucial to have evidence outside of what is provided by a client or the other party. At minimum, this is to reality-check your own client or corroborate their evidence, but proper consideration of evidence sources can have wide-reaching consequences to the outcome of a case.

Disclosure and evidence gathering is one of the most crucial aspects of family law. Lawyers need to give serious consideration to their approach to and management of this part of a case and particularly the use of alternate methods for gathering evidence, many of which are underutilised in family law proceedings. 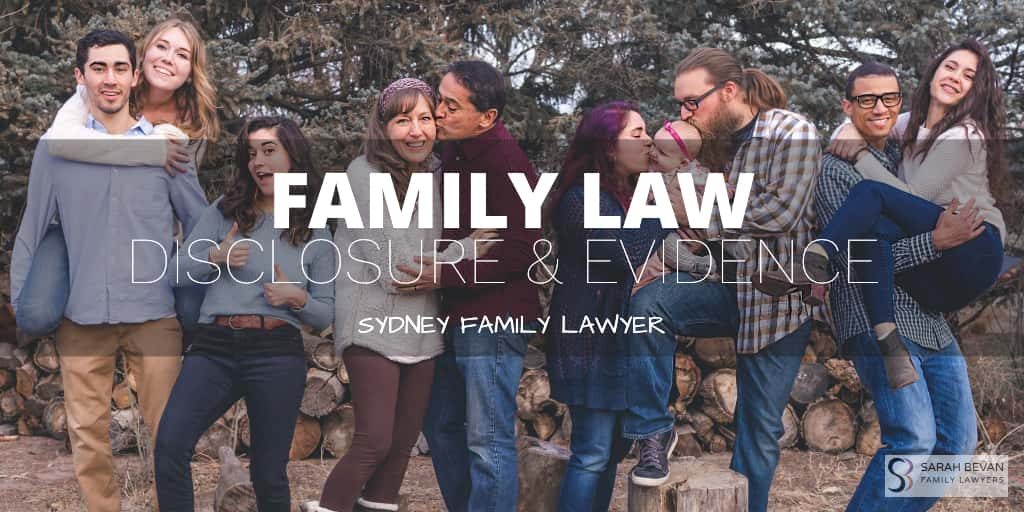